skip to main | skip to sidebar

the children, the pain and the piano.. from Jaffa to Gaza.

Late last night i wrote a FB post abut a beautiful concert by the amazing pianist Liz Magnes at her home in Jaffa, where the aim was to raise money for the children of Gaza.

This morning at 8am my friend Michel called and urged me to remove it as it had, in his words, offended many people, and that it might start a new wave of hatred against me. He claimed there were those who felt it was wrong to support the children of Gaza without at the same time supporting the children of Sderot or other cities in Israel which had been hurt by the war, and that I was “crazy” for waking up the dragon. He was worried about me,

When Michel called I was reading a book with my daughter in bed, enjoying the soft morning sunshine and savoring the last hours with her  before leaving for two weeks of concerts in Italy, a difficult and emotional moment for me. I was much too preoccupied and exhausted (I had packed till 2 am) to argue with him and I knew he meant well (Michel is a real friend) so I removed the post, but I felt very bad about doing so and the feeling has been gnawing at me all day, as my heart and conscience will not allow me to simply “let it be”.

This feeling has lead me to write the following lines.

Over the 25 years of my career i have volunteered endlessly for children everywhere, and for the children of Israel more than any. I have sung for cancer associations, hospitals, special homes for battered women and their children, for blind children, deaf children, mentally disabled youth , I have helped raise money, I have visited, done workshops, taken photos, shaken hands, hugged, kissed and what not. And I have sung for soldiers, sung in bomb shelters, sung for bereaved parents, on and on the list goes.  Believe me, I am not exaggerating. I practice what I preach…”love your brother as you love yourself”. I do not flaunt these things or boast of them (and it annoys me that I am doing so now), and I do not document myself obsessively, I simply do the job.

When Liz Magnes wrote and said she was organizing this small get together at her home , I was thrilled. I have long wanted to hear Liz play live (she is amaaaazing!), and  thought, how wonderful to be able to help children  while I’m at it, even if the help is modest and symbolic.

Had I been approached by Liz or anyone for that matter, to do the same for the children of Sderot, I would act in exactly the same way. But none such opportunity presented itself last week. So, what should I have done? Refused to come to Liz’s little concert because there was no “balancing event” to give it legitimacy?? Or, attended but kept it to myself, because it might offend someone?? My whole career has been a long series of offensive events, from singing for the Pope to singing for peace to singing with Arabs to singing in general (if you’re an ultra orthodox male) …is that reason to shut up??
I find the whole issue mind boggling.

I am asking myself why it is so difficult for some people here in Israel to support a simple act of charity and compassion towards children who are suffering, our neighbors’ children?  If for example, I would be raising money for the children of Africa, would that be ok? Or orphans in Russia or neonates in Naples? (I have raised money and volunteered extensively for all three…as good will ambassador of th UN organization FAO, Amnesty International Special Ambassador , Cavalliera de la Republica Italian , etc). I imagine nobody would find it offensive, on the contrary.

But the children of Gaza?? “Shame on you!” I am told, “they are the enemy!! How dare you show compassion towards them!? Do you think they’d show compassion towards you?? they'll slit your throat! You fool! Stick with your own kind! Israel Hater!! And anyway, the money goes to Hamas who build tunnels to kill your children” (some add, “I hope Hamas kills you and your children, Arab Lover”. Nice people.)

I feel truly sorry for people who think that way. I understand their hearts and minds are crippled by fear (some justified), tainted with prejudice and cynicism, and handicapped by short shortsightedness. Further, I suppose, they think that helping the children of Gaza means admitting in some way that we are responsible for their ill fate.

So here is a step by step analysis of the situation as I see it, and an explanation for why I choose not to delete the children of Gaza from my volunteering and raising money list:

1.   1.  People from Gaza are treated in Israeli hospitals every day. Why? Because we can. Because we have the know-how, the infrastructure, the manpower. Because despite what governments think and do, people exhibit humanity! I am proud if that. I heard that Abu Mazen’s wife was treated in an Israeli hospital not long ago! I am proud of those hospitals, those doctors (like my husband!), those nurses, who help save lives for the sake of humanity. I don’t think they say to themselves: “hmmm well, I haven’t helped a Jewish Israeli today, so I can’t help a Gazan. Sorry”. That would be ridiculous. And the hospitals are just the beginning! There are endless Israeli initiatives to help rebuild Gaza! From humanitarian aid to building products to technology, etc. I am asking all my critics: why are you not PROUD of this fact?? You should be! the same goes for raising money for the children of Gaza! I am proud to be part of a society that can and will do something like that!

2.    2. The 500 children who were killed in the Gaza offensive, and the 3000 that were wounded, were most likely not armed terrorists or serial killers. They were caught in the cross fire, just like any of us could have been. They are not the enemy. The enemy, as I have stated many times before is anyone who chooses death over life, anyone poisoned by extremism and fanaticism, anyone unable to speak any language but violence, both verbal and physical, and that goes for Arabs, Jews or whomever. A child is a child; I have three of my own and feel deeply for every single one on the planet. Every child is born pure of heart; hatred is not natural to the human species. I have always, and will always, do everything I can to secure a better future for ANYONE’s children.

3.   3.  Recognizing the pain of another does not eliminate your own pain. Recognizing the other’s tragedy does not erase or diminish your OWN tragedy. Recognizing the Palestinians struggle for independence and their right to self-definition within their own territory does not cancel your own right to all of those things. And admitting you are to blame for the loss of human life does not mean the other side does not share this blame. Self-righteousness and defensiveness, without the courage to reach out, will lead us nowhere.

4.    4. Yes, it is true that for the moment, no Palestinian organization will jump up and help the children of Sderot on the border with Gaza. On the other hand, if a Palestinian state existed, if we were two equal entities entangled in battle, I am sure citizens from the other side would feel confident and strong enough to reach out beyond the fence, just as I do. For the moment, sadly that is not (yet) the case.

5.   5.  For whomever the purely humanitarian, compassionate and human-empathy considerations are not enough, consider that our well being (including the children of Sderot!) depends on the well being of our neighbors, whether we like it or not. Healthy children with a roof over their heads, with a chance for an education and a future, are less likely to grow into blood thirsty terrorists. It’s simple really.

6.    6. Anyone who has ever been involved in fundraising knows that you ALWAYS take a risk putting your money into the hands of strangers that you HOPE will get it to the needy. Unfortunately, there is often corruption, as a result which money falls into the wrong hands, and no country is free of this illness, including Israel. So yes, there is a chance some of the money might being kidnapped by Hamas. But is that a reason not to try and raise it? No. Is the fact that Africa is full of corrupt tyrants reason not to help the children of Africa? No.

I will end with something beautiful that Gil Dor once told me.

The Hebrew word for responsibility, “Achrayut”, has at its core the word “acher”, which means “the other, the different one”.  Responsibility is intrinsically linked to our relationship with “the  other”, the one that is different from us, it is he/she we must be looking out for, whether or not that sentiment is reciprocated.

I believe only if we create a positive dynamic, only if we give a personal example that will set the butterfly wings in motion, as tiny as the first little flap may be, can we hope for an eruption of positive change… somewhere, someday. 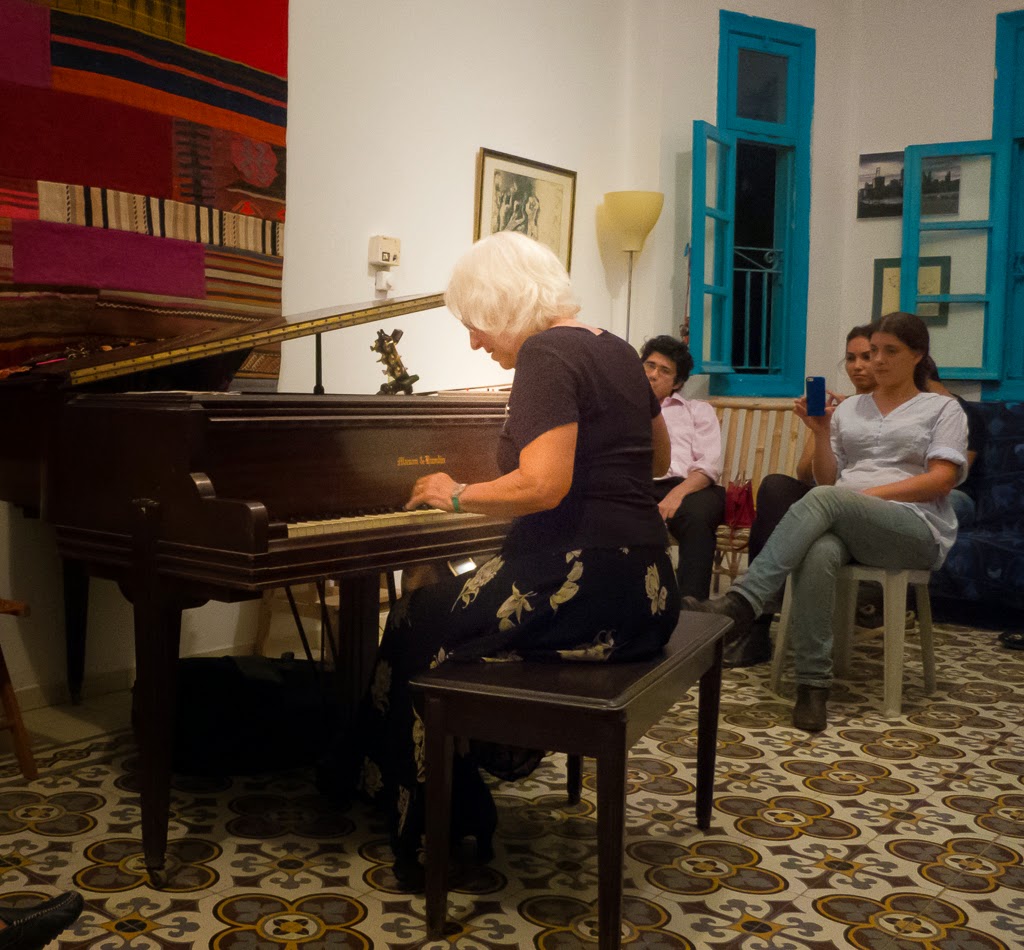 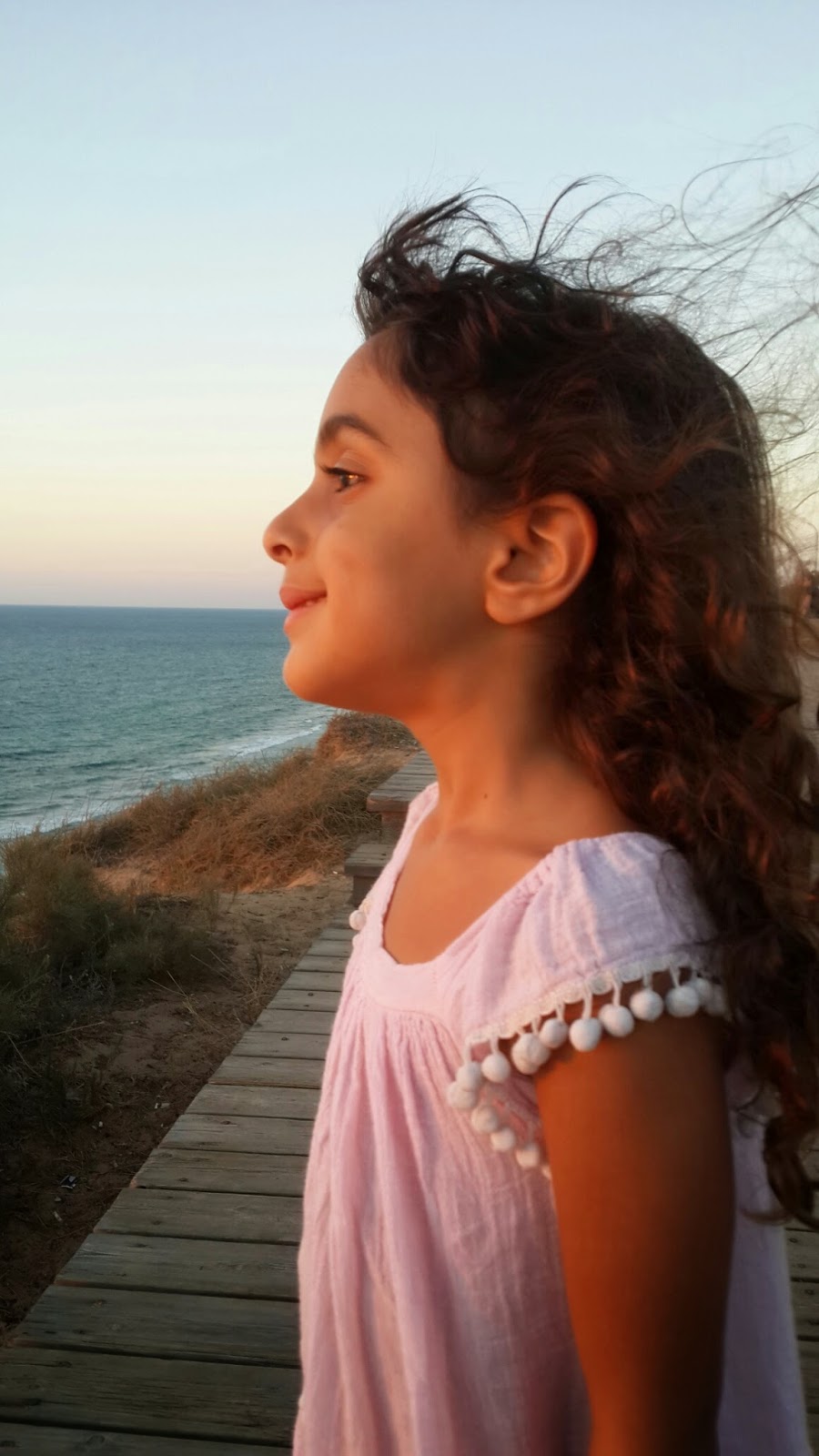 (Liz Magnes at the piano at her home in Jaffa, my daughter Yum staring out into the ocean...)
Posted by Noa at 3:37 PM